As many of you know, I have been working for The Fiore Companies for almost 24 years. That’s a very long time by any standard, but it has truly gone by quickly.

What you may not know is that one of my long-time desires has been to continue doing work that I find meaningful well into my “later years,” while definitely doing so on a very part-time and flexible basis. I have been vaguely expecting to transition into this “semi-­retirement” mode sometime in the future (you know, when I get a older).

However, after the collapse of the Fiore-Irgens proposal for the Madison Central Library, I faced a sudden void in my work plan where I had expected to spend several years of effort on Block 66.

Given the lack of real estate projects on the horizon at Fiore over the next few years, this seems to be the right time for me to begin a process of transitioning from my executive position at Fiore to an independent consulting practice that will provide me with more long-term flexibility over my activity level and schedule.

So beginning July 1, 2010, I will be reducing my schedule at Fiore Companies to four days / week.

During this time I will begin providing CFO services and business coaching for a limited number of small clients. (More to come)

I’m very happy about the run I’ve enjoyed at Fiore, particularly because of the great people I’ve worked with and the things we’ve done together. But I’m also very excited to begin moving into a new phase of my life and career.

I don’t usually care much about “shopping” when I’m on vacation. That’s just not how I relax. But I do like my comfy clothes … so when in Kinsale, Ireland last month I bought a really beautiful blue Aran Sweater.

We made good fun of the fact that it came with a numbered and signed “Certificate of Authenticity.” 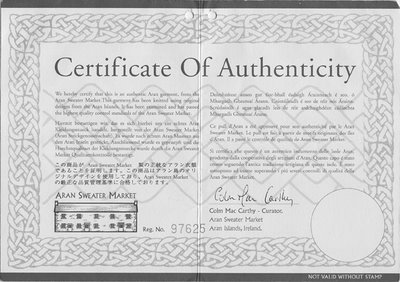 I saved it of course, because on its back is a key with the meaning of a selection of Aran stitches. I only recently looked closely at the certificate… This little detail made me laugh: 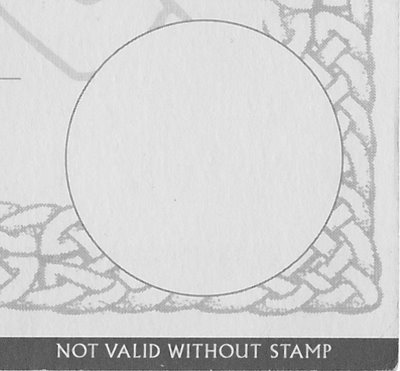 A co-worker sent me a copy of this email today, which I sent nine years ago to our corporate staff … We had recently concluded a significant “visioning” process, which had affirmed the importance of human values within our company in addition to the financial capital objectives. I then wrote a series of emails to all-staff unpacking the elements of the “vision” that we adopted. This was one of them…

In recent weeks, I have reviewed with you the elements of Fiore’s vision statement, and discussed some of the development and investment activities of the company. In the next few memos, I plan to focus on each of the functional divisions in the company. But first I thought I would share with you some food for thought from an address given last fall as part of the executive-in-residence program at the University of Notre Dame by Elmer W. Johnson, who is a former Exec VP and Director of GM. The purpose of his talk was to take moral stock of our economic system. After making a powerful case for capitalism, he went on to discuss several contemporary moral concerns, one of which was the question of “character and the market mentality”:


“In The Battle for Human Nature (1986), Barry Schwartz, a psychology professor at Swarthmore College, argues that the disciplines of economics, evolutionary biology, and behavioral theory have converged on a frightening conception of human beings as self-interested, rational, economic individuals living in a world of social Darwinism very much to their liking, a conception that has come to be so widely accepted that it threatens to undermine the traditional conception of humans as moral beings who are obligated to choose the right, regardless of self-interest. As the modern conception becomes ever more pervasive, Schwartz says, our social lives and democracy itself are tainted and transformed by the market mentality: everything becomes a commodity. Thus, a false conception of humans becomes a self-fulfilling prophecy. Yet as Schwartz says, the commercialization of noneconomic goods is ultimately self-destructive. Society cannot hold together, and even the market cannot exist, without conventions of social responsibility and mutual trust.”

So his question is: How do we prevent (both individually and as a society) the all-pervasive “culture of the market” from eroding our institutional and personal lives and frustrating our higher purposes?

I believe, that if we really “buy-in” to our corporate vision and live out these values, it mitigates the worst aspects of this market mentality. And just as some of the early defects of capitalism – such as cartels, investor fraud and exploitation of workers – were remediated by reforms over the past century, we can help to bring about a corrective to these continuing moral concerns by the way in which we carry out our business.

What do you think?

“Do not go where the path may lead, go instead where there is no path and leave a trail” – Ralph Waldo Emerson